Doctor Who: The Oseidon Adventure Review 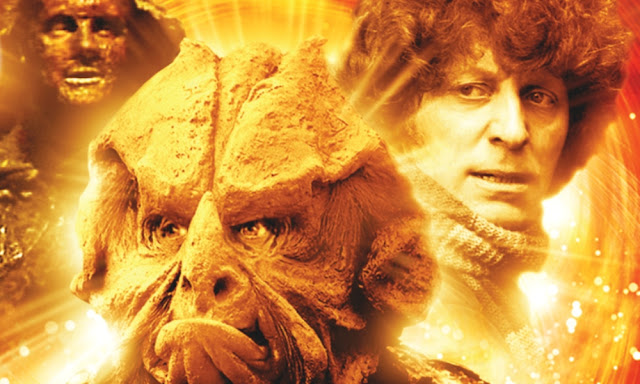 After around 40 years, the Kraals are back!

After their failed attempt to take over the earth in the 1975 story The Android Invasion, the Kraals are back, this time aiding the Master in another attempt to make our world theirs.

Nothing about the Kraals in their first story screamed comeback but the Kraals are alright here in this audio adventure. This story is built around their android creations and makes The Oseidon Adventure work well enough and as with every Alan Barnes script we are given an imaginative and creative plot. Of course if you are going to have androids in your script and they play a big part in it then the Kraals are the pefect villain to go with them. I would have preferred to see a return to Tara.

The story focuses on duplicates that are duplicates and this becomes one of the foremost devices to drive the plot and it never quite gets particularly tied. However, the plot does try to have both ways and its strongly implied that some of the lameness of the Master is because he is a duplicate but then we are told that the duplicates are supposed to be exactly like their original form. So why does the Master duplicates act different?

I love Geoffrey Beaver's Master, his voice is so silky and evil that it sounds wonderful on audio but the Master in this story is a bit of a disappointment. Not due to the actor but because of the story, it ultimately does little with him. While the plan he has concocted is extremely clever, you soon realise that it is too complicated by half when we discover what his ultimate goal is. There are some great scenes with the Master in this story but also some dull ones and by the end everyone seems to have a drop on him.

One of the highlights of this story is the appearance of UNIT much in the same vain of The Seeds of Doom where they appear at the end but like UNIT in that story, they don't really do much throughout The Oseidon Adventure. The late Nicholas Courtney is no where to be seen but this is in keeping with the UNIT of this era. One can't help but think that if Courtney had still been alive then this story would have been better with his appearance but Barnes makes good use of the lack of the Brigadier and Faraday to good effect. But Dan Starkey's Captain Clarke was an enjoyable character to listen too so hopefully he will make a reappearance in the UNIT audio adventures set in this era.

As usual Tom Baker and Louise Jameson are really good and there are some great scenes between Leela and the Master for us to enjoy.

This story is a bit of a 50/50 one. There are some great things in it and some bad things but it is, overall, an enjoyable Adventure. Pardon the pun.

THE OSEIDON ADVENTURE, WRITTEN BY ALAN BARNES AND STARRING TOM BAKER AND LOUISE JAMESON WAS RELEASED BY BIG FINISH IN JUNE 2012.