Doctor Who: Energy of the Daleks Review 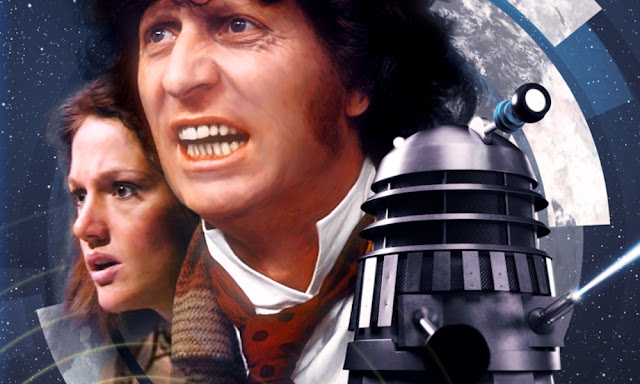 With only two meetings on television it seemed invetiable that the Daleks would once more return to menace the Fourth Doctor. But does the story stand up as well Genesis of the Daleks or fall as badly as Destiny of the Daleks? The answer is neither. It falls neatly between the two, while by no means being any particular good, it isn't rubbish so it's at least worth a go, once.

This story is told in two 25 minute episodes that, like the stories we are used to today, barely pause for breath and gives the characters some emotional depth even though, unfortunately, the Doctor and Leela appear very much as they did in the television series in the 70s.

In Energy of the Daleks, the Doctor detects some anachronistic energy power readings and lands the TARDIS in London in 2025. He finds that on top of the National Gallery is a satellite dish and a secret base hidden on the moon. Caught up in a demonstration, the Doctor and Leela soon get separated and while the Doctor remains on earth with Jack Coulson played by Mark Benton, Leela is sent to a mysterious base which houses the Daleks!

Author Nicholas Briggs crafts a Dalek story that borrows heavily but affectionately from previous Dalek serials both on audio and on television. The Daleks are not alone, they have been converting humans into Robomen first seen in The Dalek Invasion of Earth, and it a joy to hear they are back, they seemed to be used once but never seen again on screen, (though I believe the conditioned humans in Daleks In Manhattan/Evolution of the Daleks are Robomen.)

Tom Baker and Louise Jameson are on top form as usual and considering that they are recreating roles that they were playing over 34 years ago and they effortlessly capture the Doctor's twinkling enthusiasm and Leela's naivety in the face of things that her primitive mind can't comprehend.

Energy of the Daleks is a good romp and while it is in no way as good as some other Dalek stories available on both audio and DVD but it is really enjoyable even if you only want to watch it once.