Doctor Who: The Cradle of the Snake Review 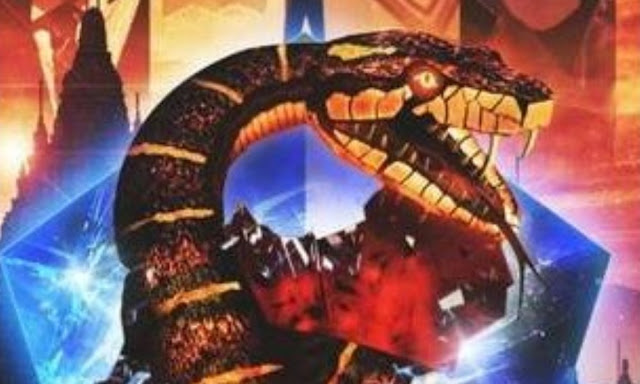 Having enticed Janet Fielding back into the world of Doctor Who to once more play Tegan Jovanka, the return of the Mara was an opportunity not to be missed. And of course it wasn't. The Mara returns here, in The Cradle of the Snake.

September 2010 saw the Mara return to the Whoniverse in this story which follows on directly from the previous story, The Whispering Forest.
Author veteran Marc Platt begins the story with Tegan collapsing after she succumbs to the power of the parasite and the Doctor must act quickly if he wants to expel the evil that is possessing her. Hoping to find the mystical Shamans he found in Snakedance, the Doctor lands the TARDIS on the planet Manussa but he arrives many centuries before the television story was set. Not yet under the yolk of the Mara, Manussa is a thriving and highly advanced civilisation with scientists and businessmen only beginning to explore the power of the mind with powerful crystals that can make thoughts into flesh which is exactly what the Mara wants...

The Cradle of the Snake is a satisfying end to the first trilogy of adventures featuring this TARDIS team. The Mara is so intertwined with Tegan that the failure to make it return would have been unthinkable. Both Kinda and Snakedance deserve the love they get, they are both excellent stories that are really well written so Cradle has some big old shoes to fill.
Fortunatly, The Cradle of the Snake does so admirably, and with much the same feel as the previous stories. The story is full of vibrant visuals of the world in and out of the mind and really gives all the actors but especially the series regulars some chances to really stretch themselves, especially Peter Davison who has the challenge of playing a good and evil Doctor, both of which he does well.

Everyone in this story rises to the challenge with Sarah Sutton and Mark Strickson certainly not feeling sheepish about their performances and trust me when I say if you listen to this story you'll understand what I mean by that. And Janet Fielding proves that she is still one hell of an actress and continues to remind me why she is my favourite companion in all of Doctor Who's history.

But what of the story itself? It is tightly written and fast paced and leaves the audience hoping for more stories featuring this wonderful team of characters aboard the TARDIS.


THE CRADLE OF THE SNAKE, WRITTEN BY MARC PLATT AND STARRING PETER DAVISON, JANET FIELDING, MARK STRICKSON AND SARAH SUTTON AS NYSSA WAS RELEASED BY BIG FINISH PRODUCTIONS IN SEPTEMBER 2010.