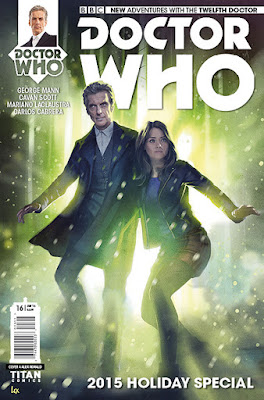 London based comic book company Titan are certainly jumping on the Who bandwagon and are now distributing comics featuring the Doctor's from 8-12 with a new series for the 4th Doctor beginning at some point this year.

What makes these comics so good is that they are written by people who have either written for the show proper, (Paul Cornell - Human Nature/Family of Blood), the many different series of books, (again an example being Paul Cornell) or for the audiobooks released by Big Finish, (Cavan Scott). This enables the stories to really capture the character of each Doctor and the overall tone of their series because they are written by people who understand the show, are fans of the show and therefore know what their doing. I don't think, and as good as a writer he is, we have him to thank for virtually creating the Marvel Comic Book Universe, I don't think Stan Lee would be a good choice to pen a story for a Doctor Who comic because he wouldn't know what he was doing. I may be wrong about that, please don't hold it against me, that's just my opinion!

The Holiday Special, as it is called, should be called The Christmas Special but these comics are also distributed throughout America so they need to cater for all areas of the world. But make no mistake, this comic definatly deserves that title. It really is something special. 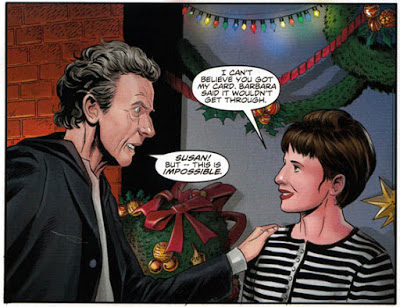 On television, the Christmas specials are usually funny and upbeat romps, with the exeptions of Last Christmas which is surprisingly creepy, Time of the Doctor, in which the ending reduces this hard-core Who fan to tears everytime Amy Pond say's goodbye to her Raggedy Man and the final Tenth Doctor Two part story.
However, this story follows that upbeat tone and the 28 paged story, Relative Dimensions written by George Mann and Cavan Scott is a fast paced, fantastically enjoyable story featuring the Twelfth Doctor and Clara amongst a host of guest characters whom will appeal to both New and Old Who fans at one point we see a Voc Robot, an Auton from Terror of the Autons, the K1 Robot and Bessie, the Third Doctor's faithful yellow speedster!

The art by Mariano Laclaustra is a delight and with the twists and turns in the script Mariano rises to the challenge well and at no point is the art confusing.

To tell you about the plot would ruin the suprise's and it will be more fun if you read it without any spoilers but I can say that this comic is great and worthy of the title, Holiday special, there is certainly something very special about it!

The Twelfth Doctor Holiday Special is available from various comic book websites, including Forbidden Planet and Titan Comics themselves. Or It is available in the new Tales from the TARDIS issue 1 comic book which reprints 3 different stories every 4 weeks available from W H Smiths and other newsagents!
Book Book Review Clara Comic Books Comicbook Comics Doctor Who Jenna Louise Coleman Peter Capaldi Review The Twelfth Doctor