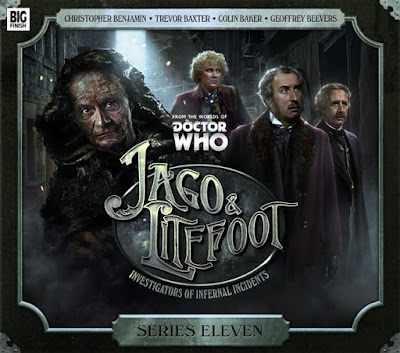 The Infernal Investigators will return in 2016 to face their darkest hour – alongside the Doctor and the Master!

This April, Henry Gordon Jago (Christopher Benjamin) and Professor George Litefoot (Trevor Baxter) will face their most fearsome opponent yet in the form of Geoffrey Beevers as The Master!
After his shock appearance at the end of Jago & Litefoot: Series 10, the Master is ready to extend his shadow across all of Victorian London - pushing the detectives to their very limits.
‘We’ve been talking about bringing the Master into Jago and Litefoot since the series began,’ says producer David Richardson, ‘and now the moment is right! It’s wonderful to hear the voices of Christopher & Trevor and Geoffrey Beevers going head to head in a battle for the future of Victorian London. And, because it’s the Master, he’s about to change the lives of our characters in a very big way…’

Aiding the Investigators in their desperate struggle are Ellie Higson (Lisa Bowerman) and Inspector Quick (Conrad Asquith) – with the Sixth Doctor (Colin Baker) racing to the aid of his old friends in the set's final story Masterpiece by Justin Richards.
Elsewhere in the box set, Jago encounters his previously unknown son, a sinister force endangers the life of famed composer Maurice, and Dracula author Bram Stoker joins the detectives for a historical adventure.

But the infernal investigations won't end there – as October 2016 will see the release of Jago & Litefoot: Series 12. Following directly on from the terrifying events of Series 11, this new set will see an ancient enemy emerging from the shadows. More news will be coming soon!

You can order both Jago & Litefoot: Series 11 and Series 12 today from the Big Finish website, at pre-order prices of just £30 each on CD or just £25 to download. And remember, when you choose to buy this release on CD directly from Big Finish, you will also unlock instant access to a digital copy for download.

The complete range of Jago & Litefoot stories are still available to order from the Big Finish website – including the ten previous series of adventures, and the duo's two special voyages with the Sixth Doctor. There is also a special two-disc release, Jago and Litefoot and Strax, which unites our classic series heroes with a star of the post-2005 era of Doctor Who!