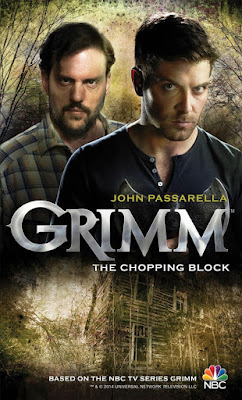 The second of the Grimm novel series begins with the Portland homicide detectives on the hunt for a monster that roasts humans alive before eating their cooked meat straight from their severed bones in this new novel.

The Chopping Block is written by Bram Stoker award winning author, John Passarella who has previously written several television series tie in novels including books for Supernatural, Buffy and Angel so the author already has this going for him.

The book is different from its predecessor but no less enjoyable and anyone who has seen the television series will already know what to expect. There are plenty of twists and turns before the eventual solving of the case. While its a tried and true formula its found to be reliable and makes it a darker and grittier version of the series than seen on television.
There is one thing that novels do which is allow us to get inside the heads of our favourite characters and pushes us to get into the mind of the victim. There is one scene with a man trying to escape and we can feel his fear almost as if it was oozing off the page and any writer wanting to create a horror novel would do well to read this chapter, its quite horrifying.

This horror isn't a one off, the whole thing continues throughout this novel. The whole thing is a tight-taught and tense thriller. Nick and Hank are the main characters throughout the book, limiting the number of Grimm characters we see here which I think works better because the Grimm world is so rich on TV and this allows the plot to completely take centre stage. As with the television series any new character is instantly a suspect although there is a great delight to be taken in guessing who are red-herrings and who are really behind the crime.

John Passarella writes a good book which is dramatic and sometimes unsettling. It is one that sticks to the format of the show and doesn't really try anything new but again, that works best for this world that might not always be suited to the print format. Being a show that relies so heavily on its visuals, print won't always good for this world but for the time being this is great way to go. It slots nicely into the continuity of the series, we are even given a authors note which tells what stories its set between and it succeeds in whetting our appitite for more like this, whether its on television or in these pages.