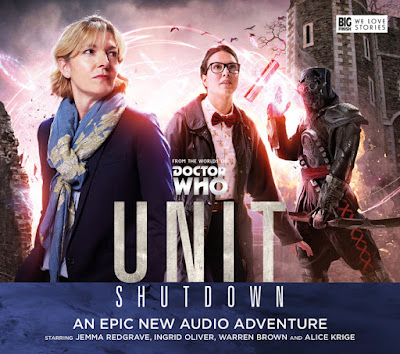 This summer Kate Stewart, Osgood and the UNIT team face the wrath of the Tengobushi...

Revealed  at Big Finish Day 8, the cover for our next UNIT: The New Series box set is now online – featuring the brand new alien creatures that will be opposing Kate Stewart (Jemma Redgrave) and her team in May!

Still recovering after the events of UNIT: Extinction, UNIT's British division find themselves under attack from a mysterious caste of alien warriors - the Tengobushi, whose reasons for arriving on Earth are linked to a dangerous new initiative.

‘Matt Fitton, Andrew Smith, Ken Bentley and I have had great fun creating a fearsome new breed of monster,’ says producer David Richardson. ‘Fast as lightning, these alien assassins will provide a brand new mystery for UNIT to solve - and, over the course of four episodes, take the world to the brink of destruction…’

Kate is once again joined by her able science officer Osgood (Ingrid Oliver), whose attempts at a social life are put in danger by the aliens! With Colonel Shindi still recovering from his battle with the Autons, UNIT's troops are now led by Captain Josh Carter (James Joyce). Lieutenant Sam Bishop (Warren Brown) returns as Kate's worldwide troubleshooter, with the new series taking the team to Geneva, Gibraltar and Antarctica.

Hindering UNIT is their latest investigation is Felicity Lyme, who is played by Alice Krige (Star Trek: First Contact, Chariots of Fire, Deadwood). Lyme's interests stretch across the globe, and her influence will have disastrous consequences for Kate Stewart. Dan Li portrays the Tengobushi's master Dokan; whose military genius and unbreakable discipline prove more than a match for UNIT's veteran soldiers.

Other guest stars in the box-set include Tyrone Huggins as Dr Kenton Eastwood, Nigel Carrington as Sir Peter Latcham, Harry Ditson as General Grant Avery, Beth Chalmers as Anna, Stephen Billington as Commander Bergam and Akira Koieyama as the Tengobushi. The set has been directed by Ken Bentley.

'One of the things that makes UNIT different to much of what Big Finish produce is the global nature of the storytelling.' says Ken. 'It's been a great pleasure to work with a genuinely international company of actors and to help bring this exciting box set to life.'

UNIT: Shutdown is available to pre-order today from the Big Finish website for just £20 on both CD or to download. Opening box-set UNIT: Extinction is still available to order, with a third and fourth series following in November 2016 and May 2017 respectively. All four box-sets can be ordered as part of a special bundle; and remember, when you choose to buy this release on CD directly from Big Finish, you will also unlock instant access to a digital copy for download.
Audio Audiobook Audiodrama Audioreview Big Finish Doctor Who Kate Stewart News Osgood Review UNIT