Doctor Who: We Are The Daleks Review 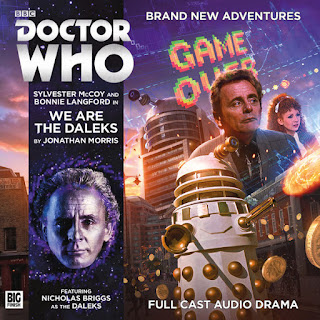 With 200 releases in their main range, numerous other series featuring the Eighth Doctor, Fourth Doctor and a host of various other characters, Winston Churchill, River Song, Charlie Pollard and the Tenth Doctor soon arriving at Big Finish, it can be difficult to pinpoint where new listeners should start with these highly enjoyable audiobooks but luckily, We Are The Daleks, makes an excellent point for new listeners to start while satisfying long term listeners like myself!

Unfortunately, the series it set in isn't highly regarded. Indeed, it is a little silly at times but I enjoy Paradise Towers and I really Delta and the Bannermen and Dragonfire and it is a shame that sometimes these CD's suffer because of when they are set and what stories they fill the gap between. I imagine that there were some who were sceptical of the story due to the era it is set amongst but hopefully this review will put those judgements to rest.

Big Finish have a talent where they take potential stories from series that were fraught with problems and creating stories that elevate said series to a hole new level. It is true that this story is closer to the light hearted tone of series 24 than series 25 but this how series 24 could have been done right. There are some pretty mind blowing ideas in this story that we wouldn't have seen in any later series, a giant office block in the shape of a Dalek. The Daleks trying to take of the world using economics and video games in the late 1980's but mixed into this tapestry is a wealth of believable characters and some excellent political satire.

While politics doesn't interest me, I don't understand why everyone can't be equal, the political ideas in this story have a way of keeping you interested instead of the usual snore-fest they are on news programmes. In this story there is a character called Celia Dunthorpe, clearly a parody of the 80's Thatcher esc politicians is a clear commentary on how Britain is now. There is also a chilling speech she makes about how humans are little short of being Daleks themselves. And with the way the world is right now, this couldn't be truer.

What I am continually impressed about is how Big Finish take companions that weren't popular on television and make them great. Mel is a character who was never served well on telly and while, I enjoyed her, she never reached the potential she had. Her character has been vastly fleshed out and is now well versed in how computers and people work and gets to help the Doctor out a lot more too.

It is also enjoyable to hear a more innocent form of the Seventh Doctor. While he gradually got darker and darker in his time on the telly and audio, Season 24's Seventh Doctor was innocent, though there were tones of something darker and it is a joy to hear Sylvester McCoy giving us that Season 24 performance and he is clearly having a ball.

Throughout the story there are some nice nods to past and future Dalek stories in particular Remembrance of the Daleks and Evil of the Daleks and as a huge Doctor Who Fan, to be able to make those links is highly enjoyable!

But if you are someone new to the classic era then these links aren't something that need bother you, they aren't hugely important nor do they linger across the story. What this story is though, is a nostalgic, light-hearted, science fiction story with a host of great characters and great energy. If you want to jump onboard the Big Finish bandwagon then this a great story to do so with!