Doctor Who: The Waters of Amsterdam Review 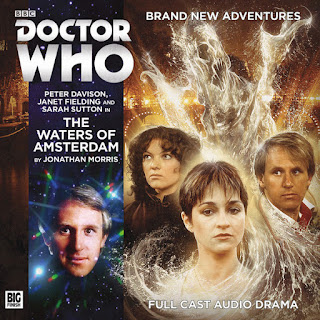 A year after the events of the television story, Time-Flight, Tegan Jovanka meets the Doctor again in the following story, Arc of Infinity. We see her join the TARDIS again but little if nothing, is said about what happened to her in the year she was away from the Doctor and Nyssa.
Set after Arc of Infinity, The Waters of Amsterdam, the latest main audio drama released by Big Finish, explains what happens in great detail.

For the past year her life has been almost as eventful as her journeys in the TARDIS especially with her meeting Kyle and subsequent break up only to bump into him wherever she goes, including Amsterdam.
But, while this may sound like a bad rom-com, its anything but. What Waters is, at its heart is a great science fiction story that includes water goblins, time travel, an alien countess and alien spaceships designed by the artist Rembrandt himself.

While this may seem familiar to the 2010 TV episode, Vincent and the Doctor, this is an entirely original story from the author Jonathan Morris. This is largely due to the focus on the lives of the characters which has sometimes been one of the downfalls for some of the releases from Big Finish.
This story especially focuses on the relationship between Tegan and her ex, Kyle, the first episode made up predominantly of flashbacks to important moments of their year long romance.

In fact, episode one is a fantastic 25 minute episode!

The whole first episode is a welcome break from spaceships, running down corridors and sci-fi elements. The Doctor's assumed position of a tour guide at the Rijkmuseum is a comedic highlight. The whole thing is so vibrant and uplifting. If I'm honest I was almost sad when it turned to proper sci-fi in the second episode. Almost. Like the first episode, the final 3 really do this story justice and is one long joy to listen to.

As I stated above, one of the great things about this story is the comedic content. Tegan losing her job in her usual mouthy way, the doctor in the museum and then there is Rembrandt.
Often when we see or hear historical figures in Doctor Who they are happy and fun but Rembrandt is the complete opposite. He is moody and grumpy but there is also a stand out scene between him and Nyssa discussing the repercussions that death have on those who are left behind that gives him a great element of sadness and it becomes apparent that the reason he is moody and grumpy is that his heart is broken. I don't think a historical figure has ever been given such emotional depth in Doctor Who before. It is marvellous.

Of course the story isn't perfect. The cliff-hanger to the third episode is resolved perhaps a little too quickly and the alien Nix aren't really explored to their full potential. It doesn't help that the voice work done to them means that some lines become an incomprehensible mess but this is a minor quibble.

This story's strengths out way it's weaknesses. With Big Finish now releasing audio adventures for the characters post 2005, and the Tenth Doctor and Donna on the way it makes sense for them to give the characters pre 2005 greater emotional depth than they received on TV. This story will also work well as a jumping on point for new listeners as it doesn't require them to know things that have happened before.

Congratulations must be given to director Jamie Anderson on the success of his first Big Finish directorial gig, he manages to successfully re-create the feel of the eighties era of the show and give a good idea of what 17 century Amsterdam must have felt like.

A touching and emotional story that mixes of sci-fi, humour and the inclusion of an historical figure all to great effect.
The Waters of Amsterdam is a very strong story which is what we love to hear from Big Finish!