Doctor Who: The Warehouse Review 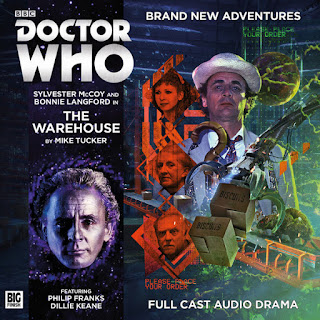 I have to be honest, I don't think The Warehouse is as good as many seem to make out. I think it is a story that doesn't really serve any purpose and there is no meaning behind it. Indeed, there is no need for this story. Unlike We are the Daleks, this story is a complete let down.

The Warehouse is clearly based on the sudden increase of online shopping we do today but told as if it were a story made in 1987. The warehouse that the Doctor and Mel find themselves in is clearly based on the Amazon company that literally sell everything. But this story takes that idea a little further with the warehouse being in space orbiting a planet whose inhabitants worship those who work, all day doing stocktaking.

There is quite a bit going on in this story but if I am being fair, it takes forever to set those events up and by the end of episode 1 you want it to be over. In fact the whole first 2 episodes are made up entirely of running down corridors, computer gags, running away from rats and strange mould, a lot of what the helling and then even more running down corridors. There really isn't a lot that goes on.
The only interesting character in the first 2 episodes is Dillie Keane's Lydek on is the high priestess on the planet below who worships the warehouse and dispenses violence on those who dare to order more food from the Amazonesc building in the sky. However, it does become apparent that she is little more that the mad priest or priestess Doctor Who stereotype invented with Tlotoxl way back in the television story, The Aztecs.

Keane's and McCoy's performances tend to standout during this story because they are given the most to do in the whole story with other actors either playing multi pull roles or in the case of poor Bonnie Langford, stuck roaming the corridors!
When Keane's character really comes into her own she gives the ending some much needed gravitas

Overall this is a disappointing parody of the troughton base-under-siege stories and the whole thing is dull and as forgettable as the premise promises. Sorry.