Doctor Who: Plague of the Daleks Review 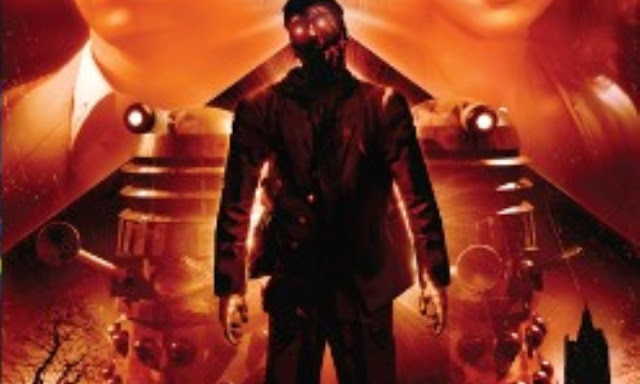 In Plague of the Daleks, the Doctor and Nyssa find themselves in Stockbridge once again but this time in the far, far future.
Things seem perfectly normal on the surface but why do the flocks of ravens keep attacking visitors and what is causing the local cricketers to turn into zombies and given the title of the story it is obvious that the Daleks are behind it all. Now the Doctor and Nyssa must team up with Issac Barclay and his daughter Lysette who are the caretakers of the Stockbridge Experience in an attempt to stop the Daleks plans.

Plague of the Daleks is best described as a pair of two handers. The story splits the Doctor and Nyssa fairly quickly and gives them both a storyline that then meets at the end. While the Doctor and Issac try to stop the zombies Nyssa and Lysette try to stay alive caught between the evil zombies roaming the streets of Stockbridge and The Daleks underneath the church.

The guest actors are really good especially Keith Barron (Issac) and Liza Tarbuck (Lysette) are charming as their respective characters and both are a joy to listen to, especially the scenes between Lysette and Nyssa which are really great fun to listen to. The extensive collection of alien visitors in the beginning who arrive to enjoy the Stockbridge Experience are pretty fun and are an interesting group of characters. And Nick Briggs as always is wonderfully creepy as the grating voice of the Daleks.

Both Peter Davison and Sarah Sutton are enjoyable to listen to and they sound great together in the few scenes they have together. Peter Davison gets a nice scene alone at the end which gives us a nice bit of range which we don't usually get to have with the Fifth Doctor.

The story is good but not outstanding and it does tie up the Stockbridge trilogy nicely but it does fall into the trap that many Dalek stories do, there can only be one type of Dalek story. When a race of aliens is as hell bent on universal domination as the Daleks there is only one kind of story that you can tell.

That said, if you are a fan of the Daleks then you will probably like this one and if you have been listening to the other two stories then you will want to know how it ends and overall its a neat little three part story that ties itself up nicely just in time for Christmas!