Doctor Who: Castle of Fear Review. 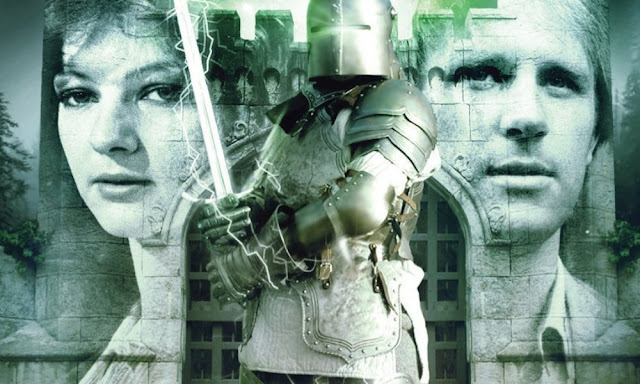 Some believe that The Kingmaker is possibly the funniest Fifth Doctor audio adventure and that none that follow will ever achieve the comedic heights that it seemed too and that proves problematic for this release that kicks of a trilogy of adventures for the Fifth Doctor and Nyssa in Stockbridge.

The Castle of Fear has several things in its favour, it's written by a Big Finish veteran, Alan Barnes, its set in Stockbridge which featured in many a Doctor Who comic and in the audiobook Circular Time, it's got the great actors Peter Davison and Sarah Sutton and an unashamedly Pythonesque storyline.
It should be funny, but it's not, in fact the humour hinders the story and makes the whole thing stumble slightly...

Most of Alan Barnes previous storylines may have the occasional laugh-out-loud line despite the serious storyline they inhabit and while Castle of Fear has a great guest cast who are full of glee and enthusiasm, this kind of comedy only works if the material they are given is, you know, funny.

As stated above, not to put too fine a point on it, this story just isn't funny, at least not consistently which is a shame because it would work really well with the interesting plot that it revolves around. While attending a Boxing Day celebration in the village of Stockbridge in the year 1899, trouble soon crops up when the Doctor and Nyssa witness a man with a strange blue box and wearing a vegetable turn up in the play to save the day. The Doctor decides to follow the track back to its source to see what is going on and arrives in 1199 where he becomes entangled in the origins of the George and the Dragon myth which is then only further complicated by the arrival of some unexpected old adversaries.

The guest cast are enthusiastic and instil a sort of humour into the proceedings and it is impossible not to be drawn in by the events unfolding in the small town of Stockbridge by their obvious charm and the regular cast of Peter Davison and Sarah Sutton should make a great comedic duo. Davison is the ultimate straight man, being funny without knowing it and Sutton is certainly capable of offering out comedic one liners with success.

Ultimately the whole thing feels like a bit of a lost opportunity that promises to be something that it isn't. Because of the lack of humour the story does drag slightly and when the monster arrives, it sounds so much like a Dalek that I thought I had put in the wrong CD!

However it does end on a satisfying cliffhanger that does make you want to know what happens next so it does work, just. Its not a story I would recommend to a beginner just because it promises to be something that it isn't and the whole thing feels a little flat. But I'm sure we all know trilogies which have begun with a less than stunning beginning...