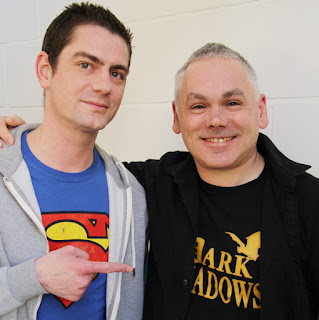 Doctor Who actor Matthew Waterhouse has recently been in studio, reading two brand new Adric stories in Big Finish's download Doctor Who – Short Trips range, for releases coming in 2016 and 2017.

Says producer Ian Atkins; 'One of my aims with being able to commission nearly a whole two years of stories was to mix up who we used for which eras. Matthew is one of those who have shared the TARDIS with more than one Doctor, and I wanted us to being able to make use of that. The writers when I approached them leapt at the chance!'

The first story, Doctor Who: A Full Life has been written by Torchwood, Sarah Jane Adventures and Wizards vs Aliens writer Joseph Lidster, and see the Doctor, Romana and Adric arriving on an E-Space planet where the dead come to life.

'Joe was writing recently for Matthew with our Dark Shadows – Bloodlust mini-series. I couldn't wait for each episode to arrive!' Ian revealed, 'So it seemed obvious to get the pair of them working together again. Joe's come up with a short story of big ideas, and Matthew rose to the challenge wonderfully. He'd clearly done a lot of prep and we were blown away by his performance.'

Adric also returns in Julian Richards' Doctor Who: The Ingenious Gentleman Adric of Alzarius.
'This is a Romantic fantasy in the literary sense,' explained Ian, 'While also giving us a real chance to get into Adric's head and see what he made of his TARDIS colleagues and regenerated best friend. It's hilarious but has the habit of sneaking up on you now and again with perfectly pitched sentiment. Matthew would be working away in the booth, and we'd be welling up outside! I really like the idea Julian came up with, and like all really good short stories it works on a number of levels.'

The release dates for both stories will be revealed at a later date.
Big Finish Miscellaneous News