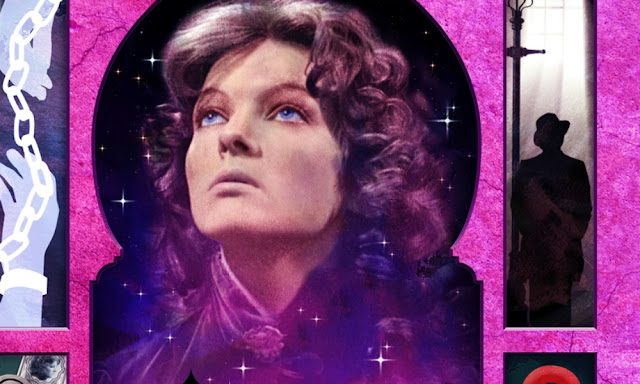 The annual Big Finish release of four one part stories is always something to look forward to especially given the trilogies that are released today, they come as a welcome breath of fresh air and provide us with a story that doesn't mean we have to buy the other two to enable us to enjoy the complete story.

1001 Nights is features four different stories all linked with one overriding story. It opens with Nyssa having been captured by the Sultan and the Doctor imprisoned. To save her friend's life, Nyssa is forced to recount a series of unseen adventures while the Doctor attempts to escape the dungeons. What Nyssa doesn't know is that the Sultan is actually an alien shapeshifter who wants the Doctor's life but needs all the information he can get to successfully complete his transformation.
These stories make up the bulk of the first three episodes with part four telling us what happens to Nyssa and the Doctor as the stories draw to a close. It is a very clever conceit even though the flashbacks show us they are going to make it out all right but in theory, we should know that anyway.

The first story, My Brother's Keeper by Emma Beeby and Gordon Rennie (Though it isn't made clear) is about a journey they made to a prison where a lone prisoner suffers at the hands of his lone warden. This is the shortest of all the tales as it also has to set up the overriding story but it is good for what it is as the story can't really use much of the characters at is has to fit into a 25 minute timeslot. Overall this is a good story though the ending was a little too cursory for my liking.

The second story, The Interplanetarian by Jonathan Barnes and sees the Doctor travel to a Victorian house to cure a demon possession. Actually, its an alien possession but whatever! It is obvious he went to the Exorcist for this kind of story but it doesn't matter as it is another cracking good story. It really makes us feel for Nyssa who is possessed and has watched her father be possessed by the Master but that emotional thread of the story unfortunately, isn't really exploited.

The third tale, Smuggling Tales by Catherine Harvey is definitely the strongest of the tales with Harvey giving a story about telling tales with a fun twist on telling tales as a form of economy. As it is about stories within stories, some of the tales become hard to follow at times but that's all part of the fun and it resonates with the final episode, The Frame.

The Frame, also by Beeby and Rennie, wraps up the overriding story in a pleasing enough manner. Alexander Siddig, Dr Bashir in Star Trek Deep Space Nine, plays the character of the Sultan very well and manages to be charming intelictual and dangerous all at the same time and works wonderfully with Sarah Sutton, with all of their scenes together being excellent to listen too and the story gives us some great material with Peter Davison, Sarah Sutton and Alexander Siddig.

Jamie Robertson also excelled himself in the music. The wind chime atmosphere of the Sultan's palace is perfect and so is the stormswept tavern the Doctor and Nyssa enters.

Overall, 1001 Nights is a tight, fast paced story with plenty of charm and lots to enjoy. These four one part stories give us a breath of fresh air and like the 1001 Nights themselves, I hope they never end.