Doctor Who: The Cloisters of Terror Review 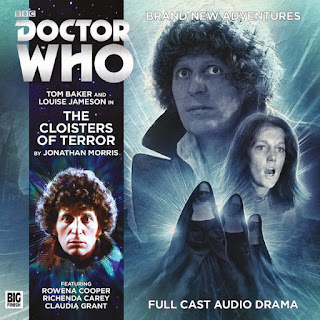 For possibly the second time in a row for this range of audio adventures we have a story that is just the right length for the 50 minute format. Often, I do find myself wishing for a story that was a four parter but I feel the strength of this story is that it fits perfectly into the hour timeslot and the person we have to thank for that is author, Jonathan Morris.

His choice of setting is also a good one, a converted convent, and while it isn't all out horror, it does have its creepy moments as well as its humorous moments, particularly Leela explaining to the Doctor that his explanations often make things even more confusing.

What is slightly out of keeping with the mid-70's feel is the inclusion of Dame Emily Shaw, the mother of Third Doctor companion, Liz Shaw, who was last heard in, The Last Post, but what is good is that you don't need to have heard that story to know who she is, so after a slightly awkward moment where the Doctor has to explain who he is and how he changed, Emily Shaw fits right into the story.
It is however, in keeping with the Fourth Doctor's ability to get on with strong willed older ladies and one is instantly reminded of Amelia Ducat from The Seeds of Doom and Amelia Rumford from The Stones of Blood.

This story is properly creepy and it feels like it would fit well in between, Horror of Fang Rock and Image of the Fendahl.

Jonathan Morris whips up a cracking good story with plenty to keep people invested in the story and plays to director, Nicholas Briggs strengths at being an action director at the end of the second half.
I also hope this isn't the last we hear from Dame Emily Shaw as she is a good strong character with the potential to go further.