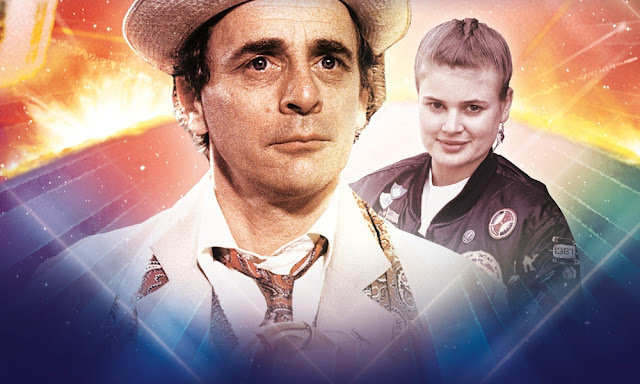 Like many of the Destiny series, Shockwave fits perfectly into the era its set, between Dragonfire and Survival and this could have easily been one of the three part televised stories that made up the entire run of the Ace era.

Most of the story takes place on a starship escaping the explosion of a star which is carrying the last survivors of a planet which the star destroyed while trying desperately to outrun the star's shockwave.
While the Doctor and Ace weren't there to stop the planet from being destroyed, the Doctor does have his own agenda which focuses on a mysterious artefact being on board the ship and this might be their last chance to get it.

As soon as this story begins it immediately evokes the Andrew Cartmel era in a far better way than his run on the Lost Adventures range ever did even down to the fact that it feels it wants to be a little longer than it actually is and there are some weird plot points. There is a moment when the Doctor thinks he might be a saboteur but then the captain says over the intercom that he isn't, and when the crew are searching for a criminal, Ace finds that person in the next scene.

I was pleased to find that one of this era's most prominent tropes is included with Ace making a friend with another strong female character. Much like she did in The Happiness Patrol with Susan Q, Battlefield with Shou Yuing, Gwendolyn in Ghost Light and Kathleen in The Curse of Fenric. In this case the woman in question is a young cultist, NineJay and this story manages to put some nice twists on this trope with their developing friendship being the best thing about this play. Also Sophie Aldred does a good job of playing both characters.

This story is nice all round even with some of the bizarre happenings, it is well suited to the timeslot and has some descent twists and turns.

Sophie Aldred, as per usual is wonderful in the narration role and really helps build up the tension of the story and her performance of NineJay is a delight to listen to, off course she also nails Ace!