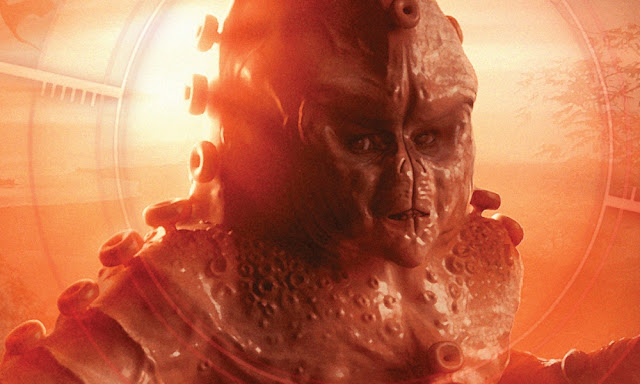 The Zygons are back and up to no good once again in one of the most predictable Big Finish Doctor Who stories of all time.
I must sound like a broken record but I was bored the whole way through Zygon Hunt, the finale, thank god, to one of the worst series of audio adventures I've ever listened to.
I think it is a shame that from a usually competent group of creators and producers at Big Finish, that this series as ultimately been one great big let down.

I understand that it was dramatic to put the name of your aliens in the titles of Doctor Who stories in the 1970s but it doesn't mean its a good thing to be imitated and what you see that you can get away with in four part Who serials, is utterly dreadful in a two part one.
We are meant to spend 50% of the story wondering who is the Zygon while we listen to a woman who had suddenly started to act strange and wonder what it could be.
I was really wishing that Briggs would trick us with a surprise ending to the first part of the story but instead...she is a Zygon. OH MY GOD! What a shock! (You can sense the sarcasm I hope!)

While all this is going on, we are subjected to listening to a group of soldiers stomping about the place and meant to think that one is a mastermind of some kind of operation. Plus, the conversation at the end of the story is supposed to fix the relationship between the Doctor and Leela that has been a storyline from The King of Sontar and totally forgotten by the end of the second story, White Ghosts but I have no idea why or how.

This series has had some highlights, White Ghosts and The Crooked Man and to some extent, The Abandoned, but on the whole, this series has been a bit of a let down. This series has squandered the wonderful acting talents of Tom Baker and Louise Jameson on content free adventures.
Its a shame that I am a massive Doctor Who fan but I have to write these bad reviews.