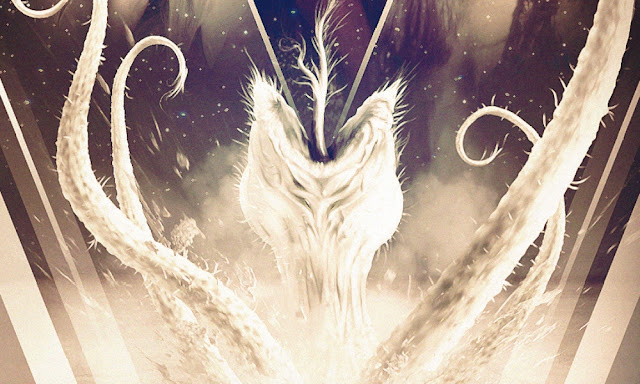 White Ghosts picks up fairly closely after the events of The King of Sontar, with the Doctor still upset with Leela's actions. When they discover that the time lords have sent them on another mission.
Writer Alan Barnes story brings the TARDIS to a world to a world permantly in darkness out on the edge of the universe but they find that someone has shot a missile at the planet.

White Ghosts, has some fantastic imagery, a planet covered in white plants that are sent into flurries at the slightest sight of light. But the story doesn't rest on this idea alone, it reveals more and more adding layer and layer to this brand new world.
Sometimes the revelations come on a bit too soon after one another but on the whole, it works well.
If there was one issue I had with this audio, is that I don't fully understand why the baddies are disposed of the way they are.

Unfortunatly, like many of the Fourth Doctor Adventures, the guest cast just play types rather than full characters. I think the problem with this is the 50 minute story running time doesn't give the characters any time to really develop. However I was suprised to discover just how strong the performances for these characters where, especially Virginia Hey's, Senior Tutor Bengel.

Tom Baker and Louise Jameson really seize the material and deliever their usual fantastic performances with some great dialogue in the scenes together. A particular highlight is the scene were Leela narrates a battle as she is fighting and it allows us some great insight into how one of the Doctor's greatest companions thinks.

This particular Fourth Doctor audio adventures is a very good 50 minute slice of Doctor Who, with more than a little bit of inspiration behind it. This story certainly bodes well for the future of the range.