Doctor Who: The Sirens of Time Review 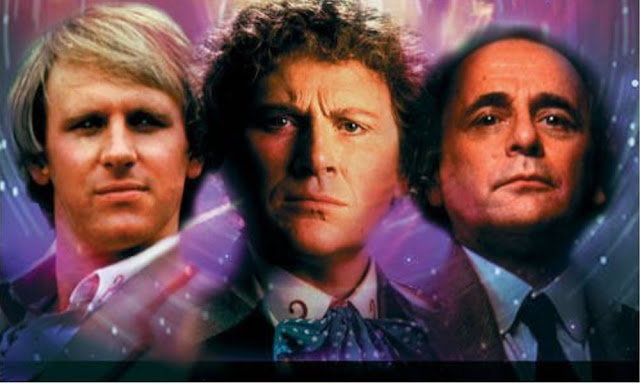 "We're going to be in a right pickle with you two here to help me..." The Fifth Doctor

Kicking off the entire Big Finish Doctor Audiobook range is The Sirens of Time.
Gallifrey itself is under attack and the president is helpless against a race of aliens whose technology is beyond the Time Lords. Celestial Intervention Agent Vasell is convinced that the whole planet is doomed unless an anomaly can be unravelled. An anomaly that revolves around the Doctor...

The story begins with a desperate plea to all seven of the Doctor's past incarnations but he has having problems of his own. The Seventh Doctor is trapped on a planet trying to stop assassins from killing a small camp of settlers while the Fifth Doctor is stuck on German Submarine during World War 1. And the Sixth Doctor is stuck on a spaceship with a dead crew and being dragged towards their doom. All of them are taken away or locked out from their TARDIS and while each Doctor hears the garbled cry for help, it is to distorted for them to understand. It will take all three of the Doctor's later incarnations, to save Gallifrey.

This first release sets up many of the Big Finish elements of storytelling, the episodic format, plenty of action, a storyline that manages many different time zones and Time Lords who appreciate the Doctor more than they did in the TV universe.
It is however, obvious that this is their first attempt.
There is less humour and introspection and it is neither as subtle or seamless as later audios. For example, releases like Circular Time, which combine several short stories into a far less choppy arc and Live 34 and The Natural History of Fear both of which, push the limits of story telling.
And, there are no companions. You do hear the Fifth Doctor calling for his companions, Tegan and Turlough but it is obvious that this early in their history, Big Finish didn't have the budget to hire the actors. It doesn't matter though because we get a wonderful final episode featuring each Doctor wonderfully bouncing off of one another!

In addition to the Doctors, there are several soon to be familiar voices heard for the first time here. Nicholas Briggs, who later became the voice of the Daleks is heard without his voice modulator and Maggie Stables makes her debut before becoming the Sixth Doctor's companion, Evelyn Smythe.

I think that this release will get the same feelings we all have with pilot episodes of a series. We like it when we first hear it but this story obviously pales in comparison to some of the stories that come after it.
The Sirens of Time ultimately is a great success and has led to numerous popular Doctor Who audio spinoffs and 204 and counting Audio Adventures.