Doctor Who: The Crooked Man Review 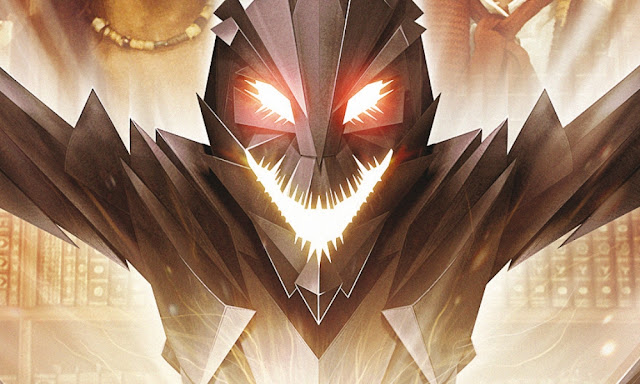 Like many of the Fourth Doctor Adventures, The Crooked Man brings back an element from a previous comment. It brings back The Land of Fiction setting and does something new with the idea. This doesnt always happen but thank god that it does with this story.
Author John Dorney brings The Doctor and Leela to a seaside town in search of a holiday. There they stumble across a murder. A bookseller has been stuffed full with pages of his books while a young actress is trying to dodge the paparazzi and a young woman moves into her deceased father's house.

The story is full of great ideas and concepts and does new and interesting things with the land of fiction. And its creepy. Not just with Neil Stuke's sinister voice as the villain or the excellent writing from John Dorney - but also Jamie Robertson's music and sound design rise to meet the quality of the script. But, not only is it creepy, its also funny and moving and sometimes, its all three at once.

There is also an excellent guest cast with Sarah Smart as Laura Corbett, Robert Pierce as her over protective boyfriend Simon and Richard Earl as Ellis Andrews. Not to mention Neil Stuke as the sinister Crooked Man. I was surprised to find that all the characters were proper characters in this one not just cogs in the plot and its the acting between these three that really sells the very moving ending.

Tom Baker and Louise Jameson are on top form as usual with great interactions between them both. It is little wonder that they are one of the most popular Doctor/Companion teams in the show's history.

While some of the stories in this range can be let down by the 50 minute running time and this usually affects the secondary characters but I'm glad to say that this one doesn't.
It certainly one of the best stories from the Fourth Doctor range.