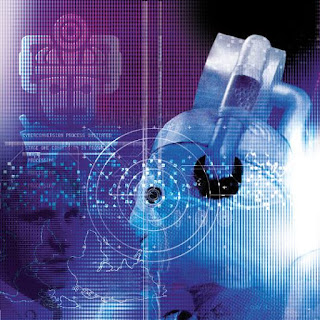 "I'm not even sure they are people by the end. They're just so many tinned left-overs..." The Doctor

Spare Parts is considered one of the best of all of Big Finish's audiobooks and its with good reason. Featuring Peter Davison and Sarah Sutton reprise their roles as the Fifth Doctor and his companion Nyssa. Writer Marc Platt pits our heroes against the genesis of the Cybermen.

I love the original Cybermen. I think that they are most accurate representation of what the Cybermen would look like in this day and age if we were to start adding mechanical parts to ourselves. They are menacing and creepy but despite the technology they have become, they still look human, which just makes them even more creepy. With their surgical burns mask clasped tightly round their faces and their human hands, I think that the original 1966 Cybermen are still the best.

The story is complex and surprising that keeps you guessing all the way through its 100 minutes running time.
Set in what I'm assuming is the 50's on the planet Mondas, does make you think that the whole story is going to be overdosed with quirkiness. This couldn't be further from the truth. It plays out as a chilling, classic Cyberman adventure that doesn't shy away from portraying the horrors of the conversion process or the loss of humanity, emotions and identity for those poor souls that are involved.

Director, Gary Russell, does a good job of creating his Mondas, a planet not really described in the show. Its a world that is stuck in the 50's due to the squalor and retrogression of living underground on a dying world, drifting towards a nebula.
The underground survivors send selected parties to the surface in an attempt to start the propulsion engines that could move the planet out of the nebula's way. The world is full of curfews, power-cuts, dim lighting, boarded up shops and homes, tram-stops and the huge "Committee Palace" with high metal gates where the mysterious Committee rule. While cyber-augmentation runs through the streets like silver veins through rock, Cybermat creatures scuttle through the streets like vermin and families have augmented budgies for pets and chest units and artificial limbs to help with various medical conditions.  Meanwhile, cyber augmented police on augmented horses, patrol the streets keeping the public in order. By any means necessary.
All this is heading in a direction that the Doctor knows only too well.

Are empathy comes from the Hartley family, Yvonne (Kathryn Gluck), Dad (Paul Copley) and Frank (Jim Hartley). Dad has to use a chest unit and Frank dreams of being called up and enlisted as one of those who go to the surface, the idea fills his father with dread. Dad likes his tea and Yvonne is the glue that holds the family together. The actors do such a wonderful job of bringing these characters to life and the so well realised are the characters that when horrible cyber related events hit the family you feel genuinely appalled by it and sorrow for them.

Derren Nesbitt plays the comically horrible body-snatcher, Thomas Dodd wonderfully and he is a character that you want to like but he has a tendency to do things that make him unlikable. He though, is destined to become a Cyberman in the end.
The other members of the guest cast are great in their roles and the acting all round is top notch. There really anything to fault about this release!

The story surprises, horrifies and entertains the listener and has some truly memorable ideas, scenes and set pieces.
The 50's era is well realised and resonates with themes from that era with the Stalinist Committee and their palace to the domestic scenes featuring the Hartley family.
The Cybermen are nasty and dehumanising evil here and although written in 2002, the ideas put across are much more relevant with the technological progress today.
In a world of upgrades, increasing reliance on technology and different apps at the touch of a button, could our own very real version of The Cybermen be too far away?