Doctor Who: Night of the Stormcrow Review 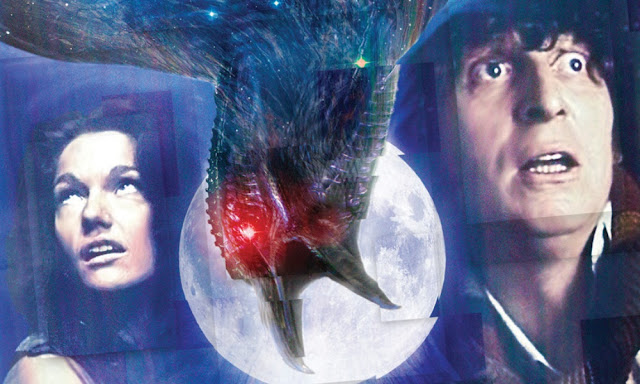 THE FOURTH DOCTOR ADVENTURES: X. NIGHT OF THE STORMCROW 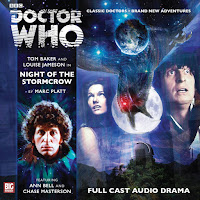 Night of the Stormcrow is an effective horror story that works well on audio. Originally released in 2012 as a subscriber offer which came with the story 1001 Nights. I am glad that this audio adventure was released in 2013 for the general public because it is an amazing story.

Written by Marc Platt who penned the story, Ghost Light, a few books for the New Adventures line by Virgin Publishing who continued the Who franchise after the series finished. He wrote Downtime featuring the return of the Yeti and the Great Intelligence as well as Deborah Watling as Victoria Waterfield, Nicholas Courtney as the Brigadier and Elisabeth Sladen as Sarah Jane Smith. Numerous Big Finish plays have been penned by Platt including Spare Parts, arguably one of the best Big Finish releases and Doctor Who tales of all time. Platt succeeds at creating an atmospheric audio adventure which combines the 'Gothic' horror of the early Tom Baker era and the base under siege scenario from Patrick Troughton's era. And the horror element is particularly effective. Platt got the idea for this story after waking up in the middle night with the feeling that someone was watching him and after listening to this story, he might have been!

Jamie Robertson's music design is highly effective and he should be commended in being able to create the sound effects for monsters that, essentially are made of nothing. Nicholas Briggs does another good job with the directing here and the 60 minute play doesn't once drag at any point. It is dark and tense and the whole piece works incredibly well on audio. I don't think that this story would be this good if it had been made in the latter part of the 70s so it feels right at home here on audio format.

The monsters are also highly effective and surprisingly sinister. They are brilliantly depicted in the form of sounds and words in a way that could never have been achieved on television and there are a few moments towards the end which prove this point that this story wouldn't work on a television format.

Tom Baker and Louise Jameson are as superb as usual and to be honest we shouldn't accept anything less than amazing from these two who always pull out the stops. During part 2 of the story, Baker excels at portraying a scary Doctor who is possessed by a Nothing creature. I have always felt that, out of the Doctor's Baker would be the scariest if he were given the chance to play an evil version of the character. It is little wonder that Baker is one of the best Doctor's and certainly one of my favourites. Jameson, like Baker has absolutely no trouble at portraying a character that she initially played over thirty years ago and she sounds exactly the same now as she did then. Her speech where Leela contemplates her place in the universe is a particular highlight and it down to the wonderful performance from Jameson that Leela is a popular companion, even now with the new series, Leela always ranks highly in fans affections. Frankly, Baker and Jameson deserve awards for their performances.

The supporting cast are also good with Ann Bell wonderfully playing the deceptive Professor Cazalet and Jonathan Forbes as the slightly cowardly Trevor Gale. In fact the scene between him and Leela discussing why he can't eat Jelly Babies because he's a vegetarian is another highlight of this adventure. Mandi Symonds plays Erica well in particular when the Nothing creatures speak through her. Chase Masterson who rose to fame during her Star Trek: Deep Space Nine days is great as observatory director Peggy Brooks although one can't help thinking she would have been better suited to a season 17 story but her character fits into the action well.

Night of the Stormcrow is an great audio adventure with the combination of Baker and Jameson elevating it to a high position in my favourite Big Finish releases and a word of warning to readers and listeners, you can listen to this in the dark but, don't be surprised if something is watching you...